A Secure ADT is Getting Ready to Leave the Doghouse

ADT is a 140 year old business with over six million residential and small business customers. With that many customers, a company is bound to have some unhappy clients. However, right now there is another group involved with ADT that is not satisfied.

While ADT customers have not put ADT in the doghouse, their unhappy shareholders have.  A complaint filed in Florida alleges the company and its executives "violated federal securities laws with respect to its disclosures concerning its business, operations, and prospects."

This complaint follows the first quarter announcement that came on Jan. 30. The quarterly results were no where near what investors were expecting, which left many of them upset with the revenue numbers in addition to the company's management and stock's performance.

According to TheStreet.com, this filed complaint is not uncommon when a company over promises and under achieves. The stock is rebounding, which leaves many to believe that the 'dog' is on its way out of the doghouse with the expectation being that earnings will be slightly higher than the break-even point and the company revenue will reach $3.4 billion. Some experts speculate that ADT will be acquired. 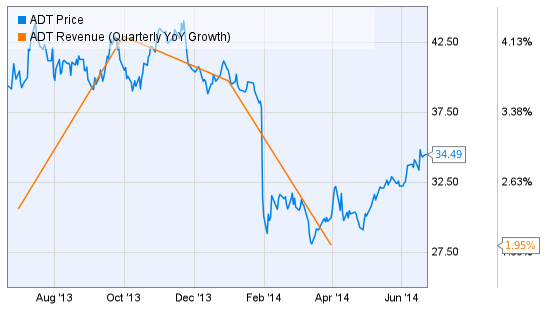