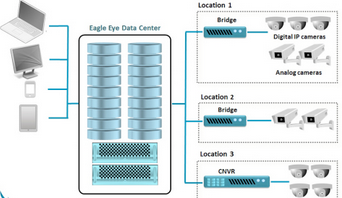 "More than two-thirds of companies now plan to expand their use of video surveillance systems beyond security and into operations improvement," Dean Drako, President and CEO of Eagle Eye said. "Additionally, there is a deepening involvement of their IT personnel in many aspects of video surveillance activities."
Some of the findings that will be included in the report are: business plans for video surveillance, cloud surveillance, top drivers for cloud, top hurdles to cloud and top frustrations with current systems.
Below is the breakdown of each questioned topic:

The results of each survey are available now.
The Eagle Eye Network is the first on-demand cloud based security and operations video management system that allows customers to have both cloud and home recording.