Google's Nest Labs home automation division announced today that they are making progress in their pursuit to create an "ecosystem for connected home devices and apps." 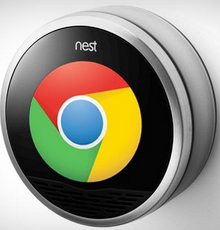 Yale Security is responsible for making the lock, Silicon Labs and Freescale Semiconductor are jointly creating the chips, and Big Ass Fans is developing the ceiling fan as part of the new project. Thread will also be adopting a "group" atmosphere, which other companies will be able to apply to be a part of later on in the year.

Thread is designed to create a "common network language" that will turn regular home devices into "smart" devices. Basically, a thermostat and a smoke alarm will be able to communicate to create a better and more efficient home.

Nest and their partners have decided to utilize Wi-Fi networks, commonly found in homes, as a way of transporting data and processing communication.

"We believe there needs to be a second network, a mesh network, that provides direct device-to-device communications," Chris Boross, a Nest Labs executive, said. "This way the smoke alarm can talk to the thermostat. Companies that want to join the group will be able to apply for membership later this year. The group will also run a certification program for all products developed using Thread, those certifications will begin the first half of next year."

Boross added that Thread "uses the common IEEE 802.15.4 wireless protocol, IPv6, and is designed to run on existing silicon radio chips." They will not require much power because the connected devices are batter-powered.

Nest started the Thread initiative to build a better home automation protocol which could be a huge victory for Nest and Google. Google acquired Nest Labs for $32 billion in February.