Price of Piper To Appeal To Home Security Consumers

When a tiny cardboard box arrived for David Weiss, he was expecting another boring set of technology to help him keep his home safe.

Weiss, however, was pleasantly surprised.

Inside of the box was a five-inch tall plastic rectangle with an 180 degree fish-eye-lens, known as Piper.

Piper is a home security smartphone product that you control from your tablet or smartphone.

It is a sleek, inexpensive ($199 for the basics) product that offers useful, real-time control of one's most valuable assets (your house, condo or apartment). 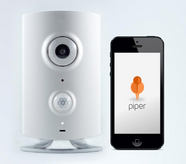 Whether you're in a hotel room in Helsinki or a yurt in big Sur, consumers will have the ability to monitor their home's activities without complicated or expensive technology. Home or away, you are only two clicks and a WiFi connection from seeing live footage of your home and what is taking place inside of it.

Consumers can also check the lights, humidity, and any security breaches on the perimeter. There is also a nifty ear piercing 105 decibel siren to scare off any would be burglars.

Piper can also be integrated with any Z-Wave devices which include: wall switches, door sensors, etc.

For example you can program your Piper to turn on all of the lights if somebody, possibly a burglar or intruder, opens a door or window. Simultaneously, Piper will also sound that wonderful siren to hopefully stop the criminal dead in their tracks.

Piper will call, text, or push-notify you if anythings even a little awry. Not bad for $199.