Want to be more "green?" How about recycling that old smartphone?

The Environmental Protection Agency notes that most smartphones will end up in a dump or landfill, and will release harmful chemicals in the surrounding environment. But after your two year contract is up don't throw that old phone out, be green and turn it into a home security device.

That is what HelixMind is betting on. 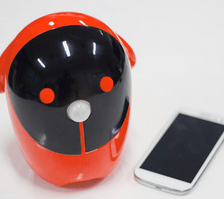 The Rico contains a series of very serious multi-functional sensors for tracking your home. These include motion detection, a thermometer, carbon monoxide detector, smoke detector and humidity sensor.

With the Rico side app loaded onto a used smartphone and the charger cables attached, your old handheld will work as a security camera, sound detector and as a Wi-Fi broadcaster. Not too bad for only $99.

The Rico also syncs with a series of smart sockets. These sockets let users control devices and to make sure they're turned on or off. The sockets track energy usage. This comes in handy when on vacation to turn on and off lamps to simulate someone home.

HelixMind is currently trying to raise $100,000 on Kickstarter to finish the first set of pre-orders. Backers can pre-order just a Rico for $99.

Most backers can pre-order the Rico with the smart socket for $139. Most Ricos come in blue, red or yellow but a few who want to pay a little extra can get the exclusive Kickstarter green. HelixMind expects to deliver all orders of Rico by November 2015.

It is not yet certain how accurate all the sensors are, or whether the Rico app can host the streams for multiple Rico devices but all are eager to find out.