Vivint Solar officially filed with the U.S. regulators last week for an initial public offering of common stock, indicating that solar continues to be a hot option for security companies.

Vivint Solar's parent company, Vivint, was bought by the Blackstone Group in 2012 for more than $2 billion. 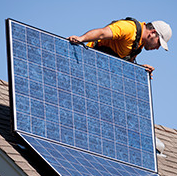 Vivint Solar's lead underwriters are Goldman Sachs, Merrill Lynch, Pierce, Fenner & Smith and Credit Suisse. The IPO fundraising target is $200 million. The company plans to use the IPO proceeds to repay debts, make investments and for "other" general corporate purposes.

Protection 1, one of the nations largest home and commercial security companies, announced it would be launching a solar division as well called Brite Energy.

GHS Interactive Security, a new California based security company, announced it was partnering with Solar Universe, a leading nationwide residential solar company, to combine security and solar into a comprehensive home automation system.

Since its launch in 2011, Vivint Solar has become the second largest solar installer in the country. The nations solar market continues to increase, it is estimated to hit 1,713 megawatts of capacity by 2017.