ADT has filed a lawsuit against Vision Security Systems, a provider based out of Utah.

The lawsuit was filed because ADT is alleging Vision employees are trained to use deceptive sales practices to gain customers. According to ADT, Vision Security Systems sales representatives were claiming to offer a free upgrade. ADT claims that these promises are part of a scam. 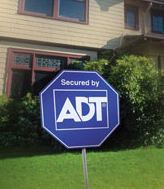 Claudia Williams says she and her dad were one of those victims, according to a report done by KVUE. She claims a Vision employee tricked her 83-year-old father, who suffers from dementia, into switching his system last summer. She says the Vision employee told them it was a simple upgrade.

"I'm like, OK, but we have an alarm system already," Williams recalled. "But he said we're going to upgrade and it's going to be free. So, I thought all day ADT upgraded the system until I drove up and I looked at the sign and I was like, that's not ADT."

Like Claudia Williams, there are other customers who are claiming to have had similar experiences with these door-to-door tactics.

"The number of complaints have gone up, and not by small percentage," David Bleisch, a lawyer for ADT, said. "Right now we're seeing them about double the number that we had last year, and the summer months are taking off, so we expect that trend to continue."

"We're with GE," Harris said in the video. "We're the maker of all of the equipment that you guys have in your home. So, we do business with all of the security companies. ADT is one of them. The reason why wer're out here is that we're just taking down these old panels, popping up a new one for you, nothing that you have to pay for. You got to say that right off the bat."

The Texas Attorney Generals office has received so many complaints regarding this same issue, so the office posted an instructional video on how to avoid being scammed.